In April, the Sugar Shakers added some flapper love to the festivities at the Circus Side Show edition of the Bazaar of the Bizarre. Checking out the handmade goods in between our sets, there are so many strange and wonderful makers of things at this bazaar.

In May, I had the pleasure of performing to a DJ set by Adham Shaikh at the Royal Ontario Museum for the Rock the Caravan edition of their regular Friday Night Live events. I wish I would have had time to check out some of the exhibits afterward, but by the time I finished they were herding people away from exhibits. It was a great concept, with international market place food, several floors of live music, drinks and access to some exhibits. My first time dancing with the dinosaurs was a blast and the crowd was atttentive and enthusiastic. I shared the stage with another Toronto-based dancer Ananda Franco, and considering we met only that night, I think we had some good chemistry on stage together. The show was truly a mulit-sensory experience, with live visuals mixed by Jax-a-Muse. 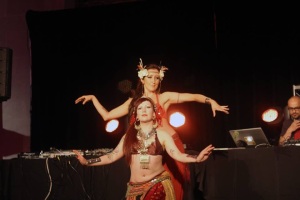 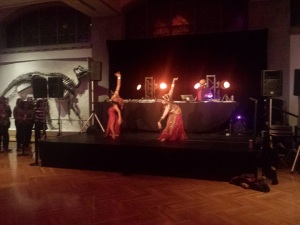 In the charming coach house Om Laila studio, my studies with Roula continue. This term we have been working on big drama/intention/character with refined moves, intricate travelling hip work with layers of upper body movement. Jack and the bean stock spirals and ovary muscles, for those who speak the language of Roula Said. Digging deep into the foundational architecture of the movements that are bellydance. Lifetimes of material to learn, soaking in as much as I can…

A couple of events coming up, mostly of the flapper variety! Including a workshop at Dragonfly studio in July. I’m pretty excited to bring charleston to even more bellydancers…check the Upcoming Shows section for details.

And last but not least, the annual Great Gatsby Garden Party at the Spadina Museum, is less than two weeks away. This event has gained in popularity each summer and this year its exploded. The people demanded advance tickets and after an initial online scramble for the pocket-friendly admission fee, the event is SOLD OUT. In response, there will be another Gatsby themed event, guerilla styles, for those who didn’t get a ticket but still want to get down with a 20’s garden jam.

As summer solstice approaches Toronto is in full summertime mode. The city is vibrant this time of year, see you around town.