through both traditional and experimental styling. Sandy began focused study of bellydance at Om Laila under Roula Said in 2005, after several years of dabbling in the art form. At Om Laila, Sandy learned the foundations of Arabic bellydance, through the unique teaching methods at Om Laila. Later her practice broadened further with an interest in tribal fusion and American Tribal Style (ATS). Sandy has been strongly influenced and inspired by the likes of Rachel Brice, Mira Betz and Carolena Nericcio.

As a  dancer in the Om Laila Troupe in it’s heyday, Sandy has performed at The International Bellydance Conference of Canada open stage, Midnight Mirage, Lula Lounge, Kensington Market Pedestrian Sundays as well as private events and fundraisers. Sandy was part of a unique percussion experiment directed by Roula Said, where she engaged in Om Laila-style alchemy of  dance, drumming, zyll-playing and Arabic singing. Through this project, Sandy later performed as a Funkabelly Allstar, alongside Nomadica at Funkabelly events.

Sandy was a dancer with the Serpentina North Ensemble for eight years,  a tribal group improv dance form that fuses American Tribal Style (ATS)/Improvisational tribal Style (ITS) and various other group formats, under co-founder and director of the troupe, Orkideh. With a never-ending vocabulary of moves for this powerful group dance, this where Sandy became versed in structured group improvisation.

With an appreciation for vintage dance, Sandy studied Charleston and solo jazz under Joanna Kassoulides. As a longstanding dancer with the 1920’s flapper troupe, the Sugar Shakers, Sandy shared her love of all things flapper far and wide at festivals, weddings and vintage themed events such as Electro Swing Club and Salon Noir. She continues to work on fusion of bellydance with vintage jazz/flapper, teaching her Flapper Fusion classes and workshops in and around Toronto. 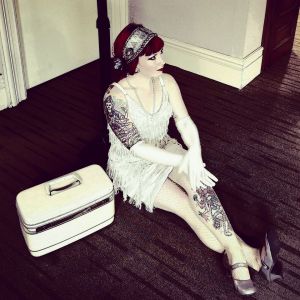 As a soloist Sandy delves into more experimental grounds and has performed at the Init multimedia festival, Funkabelly, Nuit Blanche, Darkside Studios Inversion and various electronic and world music events.  With interests in cross disciplinary collaboration,  Sandy worked with wearable tech artist Erin Lewis and drummer Jaash Singh (Nuit Blanche 2010), on a project that translated her hip movement into a visual display through a sensor in her costume. Sandy was a dancer in the Toronto debut of the Ancient Rumblings production of Inanna: an Ancient Bellydance/Rock Spectacle in 2014. Sandy is half of House of Shimmy, a theatrical bellydance-inspired duet that has performed at Fedora Upside Down and on stage with ska/punk/pop band Random Order. House of Shimmy, a bellydance a go-go act, brings bellydance into non-traditional and theatrical realms including concert stage shows, festivals, and themed events.

Sandy has completed the Seven Waves teacher training with Roula Said of Om Laila Studio. In 2015 she completed the 200-hour yoga teacher certification with Karma Teachers, in the vinyasa lineage, and aims to make yoga accessible to all bodies.  She currently dances as a soloist, with House of Shimmy and more recently has danced in collaboration with Et Alia Dance Company.