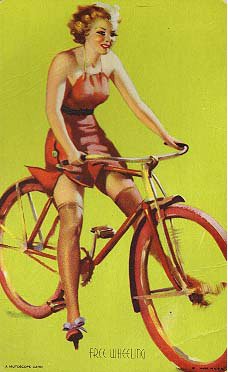 Stretching out these summer days as long as I can, living for the weekends and yearning for a time when summers seemed to last an eternity. Luckily these heat waves seem to be melting the clock and I’m savoring that. Dance wise the last month has been a slower but still steady pace.  After the madness (sweet madness, loved every minute of it!) that culminated in the Infusion gala and Rachel Brice intensive, training eased up a bit. I was ready to chill, with no shows coming up in the immediate future –but the usual practice schedule in full effect.

Although bellydance slowed down, the Sugar Shakers have been busy. We celebrated our 3 year anniversary, marked by some complimentary flapper and lindy hop classes and a dance at Dovercourt House. My almost-two-years of dancing with this flapper crew has been a blast, and always looking ahead to more vintage dance adventures.  Be sure to come join usat the Sugar Shakers open house at the end of August, see upcoming shows section for details. A few of us had a show at a wedding reception, and we got to bust out the fancy gold dresses.

Also I am proud to announce I won a hula hoop contest at the Swing Toronto Beach Party that Sugar Shakers  performed at this summer. It was nothing fancy, there were no tricks involved, more endurance with one then two hoops. It was a triumphant moment nonetheless. Look how excited I was to win that glass with a little pinup on it! Combo Royale (with a guest appearance on washboard!)  was the band for the night…amazed every time I see them. Love how they do what they do…

This summer’s Pride celebration was extra amazing. I missed last year because I was in a Rachel Brice intensive all weekend so this year I was going for sure. Saturday, the Bellydancers with Pride performed a great show that featured various local troupes and soloists. The Raging Asian Women were at the same stage and they brought the house down with their rhythmic power.

A couple weeks before I found out Lady Kier was performing –and a Deee-Lite tribute at that. To say that’s my cup of tea would be an understatement. I know some of you out there think she was a one hit wonder back in the 90’s but non mon amie, she is so much more! She writes, produces and DJ’s. She is a long standing icon/ally in the LGBTQ community, she is political and outspoken and glamorous and I have admired her since I was 12 –as she made her mark on the mainstream soundwaves, before ducking back underground. So little did I know a couple years later I would find myself in the subterranean world of warehouse parties and my very own assortment of handmade costumes…But I digress into teenage reverie. To sum it up I got to meet Lady Kier for the second time, which only slightly makes up for the fact that I missed her most epic Toronto performance at Pleasure Force event she played back in 1994. 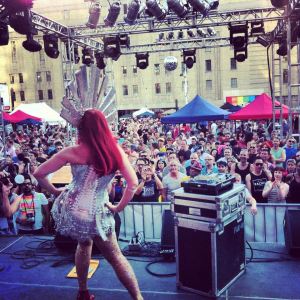 Funkabelly moved uptown this summer –to the swanky Capitol Theatre –and I was preparing for the marketplace as usual, organizing local vendors to peddle their lovely wares at the event.  I was recently invited by Roula Said to be a Funkabelly Allstar (and in part of the main show!), so was in rehearsals for that as well. Its been almost five years since Roula conceived of Funkabelly and I had been involved in a few different ways over the years, from setup to performances to later coordinating the marketplace of local artists. I did one of my first solo performances with original choreography (of course majorly supported by Roula) and was so excited to a few years later be a featured soloist at Vintage Funkabelly when it moved into Lula Lounge. I was always on the floor for the closing zaar in which those of us bellyheads brave enough would take over the dancefloor to rid our demons through our hair. Needless to say Funkabelly has a special place in my heart, and I was excited to start dancing in the rotating lineup of dancing talent known as the Funkabelly Allstars. I danced with Saba and Samara, two lovely dancers who I enjoyed sharing the stage with so much and was thankful for their warmth, focus and sense of humour. I love love love to dance with people who have more experience than me, that positive pressure always makes me push myself into new terrain. It can also be intimidating but as I’m finding out more and more over the years, I’ve never been one to let a little fear stand in the way of something I want. So the three of us did a cheeky Roula Said choreography to ‘Taala Wadaani’ (Khaled Aggag)–played live by Nomadica! Our shimmery cheetah print outfits were stunning with a slinky sarong style skirt. Costumes by Victoria Buston. Makeup by Dorota at Alchemy Center. 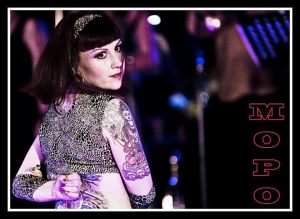 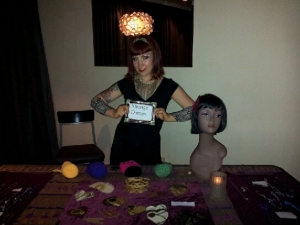 Serpentina is going full force, learning new ATS combos from Orkideh’s travels. We are working on our numbers for the second annual Moonlight Tribe (on for Nuit Blanche). This will be THE place to be for bellydance and fusion during Nuit Blanche and there are so many acts –dance and beyond! Currently there are five lovely, talented and fun dancers in Serpentina and guess what? We’re looking for more dancers! Auditions will be held at the end of this month. Check the website for details. I’m counting the days til registration opens for next years Cues and Tattoos in Seattle. Its not until next March but with this lineup of highly sought after teachers, it’ll book up in no time.

Be sure to check back for upcoming shows, I will likely be adding shows before I write a full post again. I hope you taking in all that is summertime in TO: outdoor movies, food festivals, street parties, and of course, dancing. Savour it all. 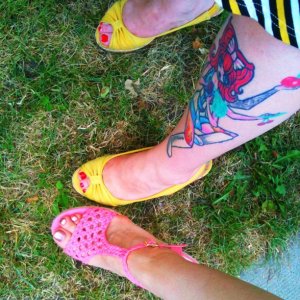 View all posts by Sandy